What is An Expat?

What is an expat? Living abroad is more common than one thinks, there are many people living and working abroad. According to new statistics, there are more than 230 million expats worldwide. There are different terms describing people who live abroad, some of the meanings evolved and changed over time. People being transferred by international companies to foreign branch offices are commonly referred to as expatriates or ex-pats. 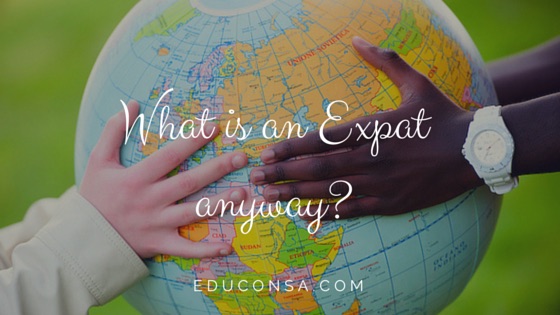 What is an expat? Living in a globalised world, the world is our home

The term 'expat' stems from the latin 'ex' meaning 'from' and 'pat(ria)' meaning 'home country', thus people who left their homes to position themselves in a new place outside their country.

What is an Expat?
About Ex-patriates, Immigrants, Migrants and Foreigners

There are tendencies to call the more affluent foreigners 'expatriates', even if they are not working for international corporations but are immigrating in a country to set up their own businesses or retire. The term 'expat' has commonly a more positive connotation than the terms 'foreigner', 'foreign worker', immigrants or migrants.

According to the 'Expat Insider' survey by Internations, there are ten types of expats. These are:

'10 Types of Expats that Roam the World'

Which expat type are you?

Do you agree with this classification?

For specified countries, see the link. Also you might fall in several categories at the same time.

Further there are immigrants, asylum seekers and refugees who leave their impoverished or war-torn home countries to seek for better and safer living conditions for themselves and their families. They could also be called expatriates in the literal meaning, but usually there is a strict distinction between immigrants (settling in a new home country without intention to return and moving abroad permanently) and expats who are positioned in one or more countries only for a limited period of time or temporarily. However these boundaries are fluid.

What is an Expat? - What is a Global Nomad?

In the recent years, technology has helped many people to have an international career and allow or require moving abroad. Many people are able to work from home and this home can be wherever there is good internet access and connectivity. A new generation of travellers, so called 'global nomads', has evolved, with professionals and travellers moving from one country to the next, exploring different cultures and working from different workplaces and different employers and in different spaces, all over the world.

Global nomads feel at home all over the world, are able to thrive from constant moving and exploring new places and people. A lack of infrastructure and internet connectivity is usually one of the few things that holds them back from moving to a new place.

Nomadic lifestyles were frowned upon for a long time. Gypsies are still not accepted for their lifestyle in many countries. The connotation of the word 'nomadic' however is changing and reflected more positively as today it is almost expected by businesses, especially from the younger generation, to be flexible when looking for work, to be able to move to different cities or even countries due to the demands of a globalised world. So attaining 'global nomad' status is now regarded as a special achievement by many employers. Being able to work independently in a variety of countries brings not only increased intercultural knowledge and skills, but also newfound freedom. However, for the employees and travellers this can also mean more financial insecurity due to constant change and leaving a new home again,  breaking up new friendships and restarting the whole moving and settling-in process is not a move many families are ready to take on.

What am I? Expat or Immigrant or Global Nomad?

What is an expat? Am I an expat? Or am I an immigrant or a migrant? This is a question we ask ourselves and are indeed often asked as well.

Are we expats, immigrants or global nomads? Where is home?

Having lived on five continents and many more different countries, we are now based in South Africa. We started out as typical 'expats' having been transferred to a foreign branch office, but since then things have changed. Companies rarely want to keep their employees in 'expat' status, warranting several nice conveniences such as special housing allowances, special travel support, and thus after a couple of years having been spoilt, also we had to go 'local'. We travel a lot, love to explore new places and meet new people, taste new food and thrive on little adventures. Often we get 'itchy feet' or feel 'wanderlust', but now we stay in one place for most of the year to provide a pretty stable background for schooling and education of our children.

So are we immigrants now? Where is our 'patria' or home? Our kids were born on different continents and never lived in our 'country of origin'. We try to keep the bonds to the country of their citizenship alive and help them find their own identity. Still they are foreign nationals living in a country where the parents decided to stay on, finally on a permanent visa, but maybe not permanently or forever - we might get itchy feet again... Well, it's actually the longest time span they have ever lived anywhere.

Our kids are true 'Third Culture Kids'. They do not see themselves as immigrants, they belong here and also to the foreign culture they are brought up with. They are global persons or 'world citizen'. Their upbringing prepared them to have an open mind, they love people, enjoy all things travel, are constantly studying maps and hope to be exploring new locations all over the world when they finish school. They seem to be on their way to become true 'global nomads'. Most probably they will travel the world before settling down to start a family or they might go on travelling.

Actually Germans, call this love for travels 'Fernweh', an "ache or desire for travelling to far-away countries', an urge to explore foreign lands and this is what our kids seem to have already.

As for us parents, we know that, as beautiful as living in South Africa is, there are still so many other places to explore and we still have seen only a tiny bit of this amazing planet.... Did I mention 'itchy feet'?

What are Third Culture Kids?

Why are white people expats when the rest of us are immigrants? 13 March 2015

Join in the Discussion

Regina Gräff is the founder and editor of ExpatCapeTown.com and co-author of the 'Living in South Africa' handbook. Born and raised in Germany, she has a degree (MA phil) in languages and intercultural communication. Regina is a serial expat and has worked as a teacher and educational consultant in various countries including the USA, Australia, Singapore, the UK. Since 2005, she lives with her family in Cape Town/South Africa.

Image Credits on What is an Expat? Shutterstock.com

Read more about our insights on Living in South Africa

What is an expat? Go to ExpatCapeTown

Back from What is an expat? to Educonsa Homepage